In the 40 years since Monsanto first commercialized glyphosate, the pesticide giant has encouraged growers to liberally douse their fields in the product best known by the brand name Roundup — the more, the better.

After all, the pesticide maker assured users, glyphosate is “safer than table salt” and weeds would likely never develop resistance to it.

Neither of those assertions was true.  Read More

Residents took photos of the section of roadside east of La Honda where they saw crews broadcast-spraying herbicides soon after Caltrans had promised it wouldn't do that this year. (Photo courtesy of Protect Our Watershed)

Caltrans spokesman Bob Haus on Friday (March 18) said that a worker recently mistakenly broadcast-sprayed herbicides in the area off Highway 84 near La Honda soon after the agency had promised to do only spot spraying there this year.

"That won't happen again," he said.

Mr. Haus said that the spraying was done by employees "who thought we were doing the broadcast spraying that we used to do." Read more

This photo, contributed by an anonymous witness to the earlier herbicide spraying, says this patch of dead grass on a steep hillside, above a drainage ditch, was sprayed by crews in protective gear alongside other workers who had no protection.

Residents who live close to and use Highway 84 in rural San Mateo County say Caltrans has not only gone back on its promises not to broadcast-spray herbicides to kill weeds along the state highway this year, but that the state agency also may have violated federal law by unsafely applying herbicides. Read more

Let’s control these grasses so they won’t spread as they have in Pescadero, Half Moon Bay, and along the coast. SGERC has received permission from Caltrans to control and remove invasive Pampas and Jubata grass along Hwy. 84 between Hwy. 1 and La Honda. If you’re interested in helping with this project, please contact Neil Panton: (650) 854-8038 or npanton@earthlink.net

We use manual methods, no chemicals. We plan to clear the Hwy. 84 corridor, but since a number of plants exist on private property as well, we’d like to help interested landowners remove these invasive plants from their property. For those who’d like to keep ornamental grasses on their property, there are several non-invasive alternatives, like these suggested by the Native Plants Society and Yerba Buena Nursery. Read more

Opponents of using herbicides to kill weeds say they are "cautiously optimistic" about news from Caltrans that the state agency is considering alternatives to broadcast spraying herbicides along the roadsides of San Mateo County's state highways. Read more

Responding to pressure from the community and state Sen. Jerry Hill’s office, Caltrans is again pushing off its plans to spray herbicides on Highway 84.

“Caltrans is further assessing our operations to figure out what changes we can implement,” Caltrans spokeswoman Gidget Navarro wrote in an email to resident Patty Mayall last month. “As of this time, there is no set date for further spraying. In the event spraying is to occur … we will provide timely advance notice to all interested parties.”

The email came as welcome news to concerned residents such as Mayall, who lives near La Honda and, for years, has led the charge to stop the spraying in her neighborhood. Read more

A number of local individuals attended a "Java with Jerry" on November 21st, 2015 in Pescadero with State Senator Jerry Hill, handing him 540 petition signatures to stop the broadcast spraying of herbicides by Caltrans along our roads and watershed. Caltrans broadcast sprays 2 or 3 times a year on State roads, including Highways 84, 35, 1, 92 and 280.  With Senator Hill and Assemblyman Rich Gordon's support, in addition to a strong public response, Caltrans has said that they're not planning to implement their broadcast spraying program along Hwy 84 -- for the time being. Caltrans has claimed that the herbicides won't run off into our watershed streams, however given the torrential rains that we've experienced over the past couple of months, herbicide runoff into our waterways seems likely... Read more

In response to concern from the community, Caltrans officials say they have cut back on the frequency of broadcast spraying of herbicides. In exchange, they have switched over to spot spraying and more mechanical measures, such as mowing, and are using less toxic solutions than in generations past.

Still, many Coastside residents remain wary of the host of chemicals used in the process of roadside spraying. The chemicals include aminopyralid — shown to adversely affect vegetable crops when it remains in the soil — and glyphosate, which has been classified as a probable carcinogen.

An online petition against Caltrans’s use of broadcast spraying in San Mateo County currently boasts nearly 500 supporters on Change.org with around 75 written signatures. Read More

Caltrans has given San Mateo County residents some good news and some bad news about the state's plans for spraying herbicides alongside local state highways. Read more

Responding to requests from a wide array of local groups, farmers and ranchers, and public officials who have asked Caltrans to stop broadcast spraying herbicides along San Mateo County highways, Caltrans officials have promised to make some changes, starting with a pilot program on Highway 84 between Portola Road in Woodside and the coast. Read more​

The Menlo Park City Council unanimously adopted revisions to the city's Integrated Pest Management (IPM) policy Aug. 25, including implementing a pilot program at four city parks to eliminate all herbicide use and authorizing the city manager to release a request for proposals to determine the cost viability of making all parks in Menlo Park herbicide-free.

Janet Davis was aghast when she saw a tanker truck and a man spraying what she thought was an herbicide next to San Francisquito Creek near Alpine Road and Junipero Serra Boulevard in Menlo Park on Tuesday, March 17.  Read more

The California Department of Transportation (Caltrans), which had said it would spray herbicides along Highway 84 west of Skyline Boulevard on March 17 and March 24, now says the job was completed in one day and has cancelled the second spray date. Read more

For the second week in a row, the California Department of Transportation (Caltrans) at the last minute on March 10 postponed spraying herbicides along Highway 84 west of Skyline Boulevard, due to weather. Read more

To spray or not to spray? That is a question — but certainly not the only one — residents of unincorporated San Mateo County have been doggedly asking Caltrans, which has decided to spray herbicides along 12-plus miles of Highway 84 west of Skyline Boulevard this month. Another equally important question is: Are Caltrans decision-makers showing respect for and good faith toward residents who oppose chemical weed-control and were assured by the agency that they would be given advance notice of future spraying? Read more

Neil Panton, who owns property in the area on Highway 84 to be sprayed, erected "No Spray" signs but also went out and mowed the vegetation in his property's frontage, something he says took less than an hour. (Photo by Neil Panton.)

For the second week in a row, the California Department of Transportation (Caltrans) has at the last minute postponed spraying herbicides along Highway 84 west of Skyline Boulevard, due to weather. Read more

A battle is brewing in San Mateo County over the use of herbicides. Watch Video and Read more

County residents who have been trying since 2006 to convince San Mateo County supervisors to find non-chemical ways to kill weeds were celebrating on March 13 after the supervisors voted to end roadside broadcast herbicide spraying.

The resolution, which passed 4-0 with Supervisor Rose Jacobs Gibson absent, bans broadcast spraying by the county everywhere except at its two airports, but allows targeted spraying of invasive plants. Read more​ 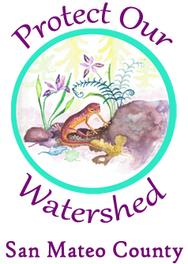